I am attempting to convert some framework documentation to DocC. From the tutorial, it looks like this should be the solution, but it's not working:

I made a very simply framework with the following type:

I have a corresponding DocC landing page:

The landing page shows up when I build documentation. So far so good. But when I try to add either of the other two init(foo:) initializers... 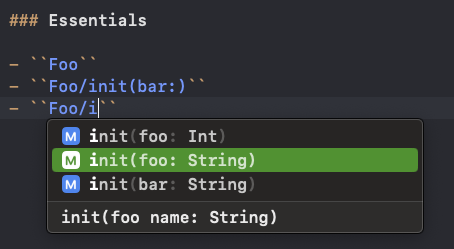 The disambiguation suffix does not appear. Trying again by hitting escape...

Again, looks like it should work, but no suffix is added. Of course building the documentation at this point gives me a Topic reference 'Foo/init(foo:)' couldn't be resolved. No local documentation matches this reference. Which is pretty confusing because the error is resulting not from "no matches", but from multiple disambiguated matches.

Is this an Xcode bug? If so, is there a workaround?

Adding these suffixes to my markdown works: 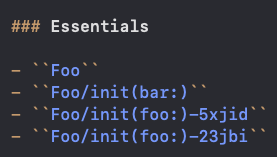 Would still like to know whether anyone else can corroborate my Xcode issue.

Is this an Xcode bug?

Yes, it looks like a bug that Xcode doesn't insert the necessary disambiguation when providing link completion.

IIRC bugs in Xcode are considered "off topic" for this forum but if you report a feedback (at https://feedbackassistant.apple.com) and post the feedback number in this thread I can make sure that it reaches the right people.

If so, is there a workaround?

I'm not aware of a good workaround. The best I could think of would only improve the error message—making it easier to find the missing disambiguations—but Xcode still wouldn't add the necessary disambiguation when providing link completion and it would require a newer toolchain than what's included in Xcode 14.2.

We have been working on a new experimental link resolution implementation in Swift-DocC but that code is only available in the Swift 5.8 toolchain and later (the Development toolchain). With one of those toolchains (from Swift.org - Download Swift) you could opt-in to the new link resolver implementation by setting this user default:

With that change the error message from building documentation would include information about the missing disambiguation: