What is the future of Swift in the server side? What are the advantages of Swift?

These various point of view are interesting, but the problem remains.
Why choose Swift for server side development and deployment and production?
Who already has significative production experience? how to have access to information
about deployment, performance, reliability, liability ?
How to get regular and liable information about it?

I want to push Swift/Vapor solution for a significative solution
Consisting of a set of API/Rest application server and reliable backend database
The risk is badly considered by people from tender side in front of a simple classic obfuscated but proven java/javascript or other! development effort, time, team..

I assume many people or emerging organisations have the same problem, how to join our effort and arguments, with credible references?

Other point is that we (my company) will not invest and go over simple test deployment like POC until we get some real and very positive references.

In the meantime, I have to consider that people who know don't tell!
or may be, advantages are not so clear...
Does Swift remains a hobby or a research area ? or not.

What arguments to customers ?

You can try the following:

Who already has significative production experience?

Ask the Kitura and Vapor teams. They will share what they're allowed to share about their customers. You can also attend the https://www.serversideswift.info conference and talk to everyone in person. Last year, there were several companies present to talk about how they're using server-side Swift in production.

The server-side Swift community is very open and very available to help you out where needed. I've received a lot of help just by asking a question on Slack or opening an issue on GitHub or JIRA. I don't imagine you can get this sort of one-on-one help in other ecosystems without spending $$$.

Amazon is using Swift on the server GitHub - amzn/smoke-framework: A light-weight server-side service framework written in the Swift programming language.

I see your point, but there're some errors in details.

It's true that Swift has some advantages, but for two above points, it's hard to claim them as Swift's advantages.

We are serving a few thousand users with our Swift backend (based on Vapor).

The major advantage for us as a team of 2 is code reusability, which in turn saves us a ton of time. We not only share models, but also resource descriptors so we only have to describe an endpoint once and in turn that can be imported and used anywhere (iOS app/tooling/other services). We have a micro-service architecture so inter-service communication is much easier when you can pick up a resource descriptor to make a request from one service to another.

We use AWS and MongoCloud for our infrastructure, and run everything using docker etc. you know, the standard these days.

It's not all sparkles and rainbows though, we have had a number of hard to track down issues when running on linux in the past which didn't exist on macOS. But these seem to be behind us for the most part.

I'll offer a different view than most people here.
We're running Swift on the server and I wish we didn't.

Now, as anyone here knows, Swift is a modern language and has a number of big advantages over something more traditional like e.g. Java or Ruby: operator overloading, null- and (reasonably) memory-safe, expressive type system (it has holes, but far fewer than many traditional languages), good support for functional constructs. The language has some warts, but which language doesn't?

But it also has some serious drawbacks:

and so on. I think Swift on the server is just not there yet. Generally it works, yes, but there's just too many pieces missing.

@Chris_Bailey answered most of these questions today during the server-side Swift SOTU: 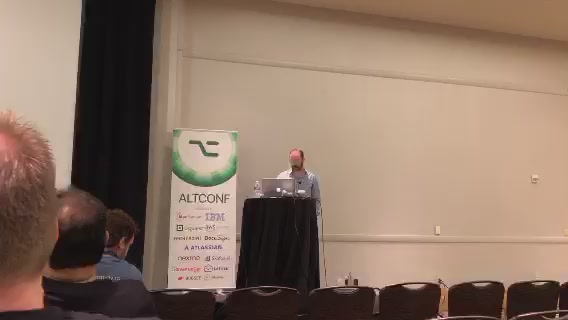 @Chris__Bailey giving a state of the union on Swift on the server!

also, on big projects, the compiler is slow

go off,, this is probably the single most annoying thing about the language out of everything you said (and i agree with everything above). part of this is probably because swift doesn't have or aim to include a macro system, so any decently sized project is going to have .gyb files to do codegen, and since i'm regenerating these (large) swift sources every time in my build script, it means they all have to get recompiled every time.

Why not generate the files in /tmp and only overwrite if there's a difference? Sure, there's overhead in performing the diff, but probably much less so than recompiling. At least for now.

i found if i kept the generated .swift files around i would accidentally edit them instead of the original .swift.gyb files, so i just had the build script delete them all after the build ran.

that being said i just remembered all source file names in a swift project have to be unique, so maybe stashing them in a /generated directory might work...

go off,, this is probably the single most annoying thing about the language out of everything you said (and i agree with everything above). part of this is probably because swift doesn't have or aim to include a macro system, so any decently sized project is going to have .gyb files to do codegen, and since i'm regenerating these (large) swift sources every time in my build script, it means they all have to get recompiled every time.

We have some .stencil files instead of .gyb, but I don't think this is the huge bottleneck in our project. I think it's mostly type-checking.

I watched it, and it really doesn't adress "most of these questions" at all. The only ones it seems to address are:

I think it's mostly type-checking.

I'm pretty sure it is type-checking, and quite probably also the dependency resolution overhead. After working for a bit on implementing Swift type checker from scratch in Swift itself and studying related talks/articles, I'm not quite sure if some of the early stage language design decisions were worth it.

There seems to be a consensus that existence of function overloads can blow up type checking time exponentially. There can be specialized solutions for cases, where arguments and return values in chained calls of overloaded operators are all the same. Say, 1 + 2 + 3 + 4 + 5 + 7 + 8 really shouldn't blow up, despite + having a ton of overloads, just need some smart detection of these cases. But in real world, the use of function and operator overloads is much more tricky and the complexity is NP-hard. Overall, I think operator and function overloading is more of a cosmetic feature with too big impact on the speed of the type checker. I like how Haskell's and PureScript's type checkers feel much more responsive, despite these languages having more advanced and powerful type systems: they just don't allow overloads in the same way that Swift does.

The other thing I didn't expect is that multi-file modules with no explicit intra-module imports also have impact on the incremental compilation speed. Check out the docs on Swift's dependency analysis:

The dependency analysis step wouldn't be needed at all if only we had to specify intra-module imports explicitly in every file. I understand that the initial motivation was to avoid header files altogether, but again, it was probably a step too far. I really like how top of the Swift file only needs to list external module imports, but now I also know that we pay a price for it. A minor change in a single file in a module can trigger an unexpected cascading rebuild of the whole module, especially as the existing dependency resolver tries to be conservative.

Obviously, it's too late to change any of these fundamental features, but I really hope that dev tools can become more advanced to show the impact of existing function overloads on the compilation time. Same with the dependency resolution, maybe we need to pay more attention to this area and improve the resolution algorithm, or at least get some debug tools that warn about cascading rebuilds.

It's interesting that llbuild can already provide some build process debug information, but I don't think this feature is available in SwiftPM or Xcode. As I continue working on Swift dev tools in my spare time, I'd be happy to get more input and suggestions and what else could be improved in this area.

I wonder if we could move to this world by introducing the possibility of intra-module imports, and then tying them together with namespaces to use the carrot, rather than the stick (builds fail). I know namespaces have been discussed ad nauseam on the forum, but if they had to be imported from day one by importing the implementation file, that would encourage developers to help the compiler minimize their build times as a reward for using namespaces.

Although we can't flat-out drop existing features anymore, we can certain evolve best practices, and introduce more robust features while deprecating and discouraging use of misfeatures over time. This isn't ideal, since getting from deprecation to actually dropping support takes a long time, and in the meantime the possibility of someone relying on features that negatively impact the usability of the language still lingers, but it can still steer the community forward. I for one would love to see a more Haskell- or Python-ish import model, along with the IDE support to automatically groom explicit import lists; @codafi had pitched this before on the old swift-evolution mailing list.

"we have the SSWG now, so the ecosystem will thrive" doesn't convince me at all. A lot of successful software wasn't designed by a committee.

Just to mention that it's not the SSWG's mission to design software by committee. As per the SSWG charter everybody can pitch a library to the SSWG, existing, or new. Assuming it has been proposed, whether a piece of software is listed as 'SSWG approved' is determined by whether if fulfils the minimum requirements. The SSWG explicitly allows duplication and competition.

What the SSWG tries to achieve is to give you certain guarantees about liveliness (e.g. a project will get security fixes) and compatibility (it should work with the vast majority other Swift and for sure other SSWG packages) of a project.

The initial reason for the SSWG reboot was that we essentially had three larger ecosystems in the web frameworks (Vapor, Kitura, and Perfect) with very little sharing. The parties involved however all liked to have more sharing alongside to reduce duplication of efforts. But we also needed some reassurances that a certain packages has certain code quality, compatibility, and complies with other ecosystem standards.

Can Swift server side services use native Apple's native framework such as CoreData and CoreML?

I would imagine yes, but only if that server is running macOS. These frameworks are not available on Linux.

Can Swift server side services use native Apple's native framework such as CoreData and CoreML?

That depends on where you decide to host the "server side" services. If you run a macOS machine as a server, then yes. Those Apple frameworks will be available.

If you intend to host the service on Linux, then no.