Un-pyramid-of-doom the `with` style methods

Spinning off the tangent:

I think we should eventually discuss how we're going to un-pyramid-of-doom the with style methods, but that is definitely orthogonal to this proposal.

Guard seems to be good fit for this task as it establishes a new scope without nesting, can we somehow tweak it so instead of:

Don't we need a notion of non-escapable variable? Such that a variable can only be accessed in the current scope.

withXYZ { ... }-style methods give you scoped access to a resource. There are a couple of reasons why you might need that, and there are already some sketches of ways we could improve them. They rely on transforming these methods in to yield-once coroutines.

That's the basic idea. Of course, to fully tackle scoped resources, it needs to do more:

Happily, there are ideas which could solve all of these issues. For #2, we might introduce borrow variables:

When working with deep object graphs, it’s natural to want to assign a local variable to a property deeply nested within the graph:

However, with shared mutable objects, such as global variables and class instances, these local variable bindings necessitate a copy of the value out of the object; either mother or mother.father above could be mutated by code anywhere else in the program referencing the same objects, so the value of mother.father.sister must be copied to the local variable greatAunt to preserve it independently of changes to the object graph from outside the local function. Even with value types, other mutations in the same scope would force the variable to copy to preserve the value at the time of binding. We may want to prevent such mutations while the binding is active, in order to be able to share the value in-place inside the object graph for the lifetime of the variable referencing it. We can do this by introducing a new kind of local variable binding that binds to the value in place without copying, while asserting a borrow over the objects necessary to access the value in place:

It’s also highly desirable to be able to perform multiple mutations on part of an object graph in a single access. If we write something like:

then not only is that repetitive, but it’s also inefficient, since the get/set, or read/modify, sequence to access mother, then mother.father, then mother.father.sister must be repeated twice, in case there were any intervening mutations of the shared state between operations. As above, we really want to make a local variable, that asserts exclusive access to the value being modified for the scope of the variable, allowing us to mutate it in-place without repeating the access sequence to get to it:

For #3, my hope is that we extend the idea of ref/inout variables to function return types.

For example, I'm currently working on an API for WebURL which provides a view of a URL component as a list of key-value pairs. The view can be configured with a URL component and schema, but this unfortunately means it can't take advantage of modify accessors (properties don't support parameters). This API is only possible using a closure scope:

I hope users will eventually be able to write something like:

To tackle #4, there are sketches for @nonescaping read and modify coroutines, which should help express the idea that the yielded value has a limited lifetime.

Contiguous collections like Array can provide new subscript operators, allowing access to part of their in-place contents via a BufferView:

Note that these APIs use the @nonescaping modifier on read and modify coroutines, indicating that when client code accesses the BufferView, it cannot copy or otherwise prolong the lifetime of the view outside of the duration of the accessor coroutine.

The nonescaping constraint allows BufferView to be safe, while having overhead on par with UnsafeBufferPointer, and @nonescaping coroutines that produce BufferViews provide a more expressive alternative to the withUnsafe { } closure-based pattern used in Swift’s standard library today. Multiple BufferViews from multiple data structures can be worked with in the same scope without a “pyramid of doom” of closure literals.

So the issue has definitely been noticed. Besides making code more difficult to read, closure scopes are just not enough for important things like enforcing lifetimes. As we gain these new expressive capabilities, we'll hopefully be able to replace uses of the withXYZ { ... } pattern.

withXYZ { ... }-style methods give you scoped access to a resource.

Note that the scopes of a, b & c variables in the above two examples is (almost) identical: 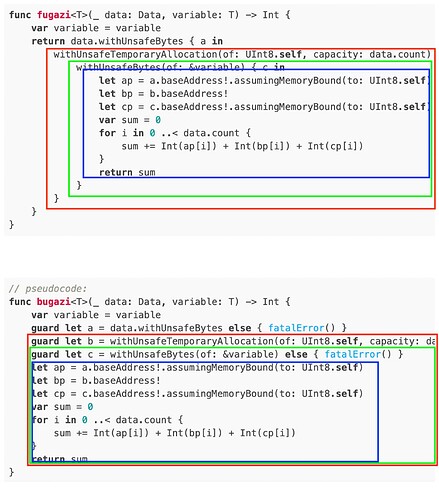 i think this assumes the cleanup can happen synchronously, but this is often not the case — i have many APIs that rely on performing a sort of “goodbye” handshake, and this can only be implemented with a with-style closure.

Can you provide a simple example of that?

Edit: I mean something with withUnsafeBytes / withUnsafeTemporaryAllocation / or similar being discussed.

here is an real API i am currently working on:

i commented the “cleanup” lines with // cleanup

It's definitely a topic worthy of a design and solution...

We're often forced into "with..." style when some cleanup is needed, but the fact that things are then in a closure can be quite problematic.

The error is "right" in the sense that if the call suspends, you would have an exclusivity violation on actor state. But really, the only reason such TaskLocal using APIs are using closures is because they need to ensure cleanup, like this:

So this is very unfortunate since it makes traces much harder to use when we also mutate state like this.

If we had a form of:

The important thing here being that span must be kept alive until the end of the scope, and it would be semantically wrong to clean it up earlier. If it is just a variable we don't really have such strong guarantees where it'll be deinitialized; Though @Andrew_Trick may need to double check me there...

Relying on people manually doing a "pop the task-local" is unsafe since they'll / I'll forget and it'll corrupt the task-local stack. So... currently there is no good way to do this, unless we had some way to ensure "live until the end of this scope" for a variable, be it some using ... or other marker or something else...

So... yeah, I think this is an important topic worthy of a solution.

I don't think there's any reason that yield-once coroutines couldn't accommodate async setup/cleanup work. There might be suspension points when the access begins or ends, but it's not entirely dissimilar to async properties and async let variables.

For instance, I could imagine us introducing something like async borrow/async inout references as siblings of async let.

It’s at least not possible with the current implementation of _read and _modify, for two reasons: