Issue 3 for "The Swift Programming Language" tracks the need to adapt how we write formal grammar, to pick a notation that's compatible with authoring in DocC.

When we were picking a notation for the launch of Swift 1, the most important consideration was that the grammar should be easy to read, even for someone who hadn’t previously worked with formal grammar. This focus on readability resulted in the following:

At that time, Swift wasn’t open source and Swift Evolution didn’t exist, so we didn’t give a focus to how easy it was to write. Experience since then has show that subscript “opt” is particularly hard to write in some important contexts. It isn’t available in the markdown dialect used for Swift Evolution proposals, or in the markup used by the Swift forums, which makes talking about changes to the grammar more difficult.

Are these still the right goals for TSPL’s grammar? Does this proposed notation meet these goals?

The differences between the current grammar and what I’m proposing as a DocC-compatible notation are:

The screenshots below illustrate this proposed approach, and the existing approach: 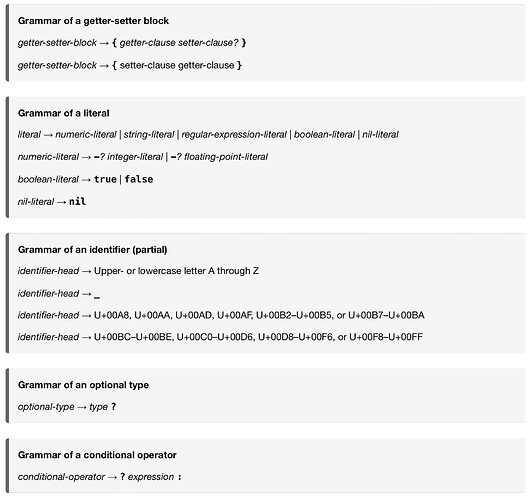 I find the grammar of Go programming language easier to read. It is also machine readable because it does not use bold or italic formatting to convey meta meaning.

I like the idea of using asides with custom titles (implemented here) to group parts of the grammar.

Looking forward to your feature proposal here, a flexible system to define arbitrary anchors and link to them would be a nice addition for DocC in general.

For macOS, they look better on GitHub (using the system font) than on these forums (using Arial).

Other platforms may not have suitable fonts.

The alternatives I considered were variations on OPT and (opt) written after the token. For example:

The suffix -OPT form looks ok after a syntactic category name, but the hyphen closed up against the end of the code voice looks awkward. Removing the hyphen makes it a bit ambiguous whether "OPT" is a separate token or applies to the token before it.

Using (opt) has similar challenges, although to me the (opt) form could be a reasonable alternative to the ? spelling.

Because the grammar in TSPL only marks single tokes as optional, not groups of tokens, I didn't previously consider spellings like the square brackets used by EBNF. (Although we did consider that in the Swift 1 timeframe. One of the syntaxes for grammars that I reviewed was the Open COBOL manual, which used brackets for optionality and vertical stacking for alternation.) If we used that spelling, we could make a style rule that we still don't use grouping. Here's what that might look like:

I find the grammar of Go programming language easier to read.

Can you share a little more detail? What makes it easier to read? Why do you prefer it?

Making the typeset version of TSPL machine-readable isn't a goal, because the documentation is for people. However, if you wanted to read the grammar in a program, you could still read the markdown source.

Thanks for pointing that out, but as you noted they don't really look good. Using them as pseudo-subscript also doesn't line up with the rationale for their inclusion in Unicode or recommended usage:

Super and subscripted letters and digits are quite common in some forms of phonetic or phonemic transcriptions, where the use of styles is both awkward and prone to data integrity issues when exported to plain text. (source)

In some cases, they look even worse than your screenshot:

I find the grammar of Go programming language easier to read.

Can you share a little more detail? What makes it easier to read? Why do you prefer it?

I feel that the use of a simple but elegant notation to specify optional or repeated elements makes those elements easy to spot while reading the grammar.

This is maybe because I am quite ancient. I wrote my first program in Fortran (actually punched it onto cards) in 1975 on a Univac system. I prefer simplicity, and I really care about how much storage and energy we humans use to store or transport pieces of information around the world.

I'd second that, I prefer Go version better: for me it is easier to read and understand, and – not a small thing – much easier to write/represent in a plain-text editor. It's a variant of BNF/EBNF historically used in Pascal based languages, while C traditionally used this different variant with the subscript "opt".

PS. I did not program with punch cards

this may not be a welcome opinion, but i personally think it is more important to know if an audit has been done to ensure consistency with the real grammar implemented by swift-syntax, because i recall many of the production rules in TSPL are badly out-of-date.

i think this should take precedence over superficial concerns about font size and notation.

Are these still the right goals for TSPL’s grammar? Does this proposed notation meet these goals?

Sorry, I think I phrased this a little too broadly. For this specific discussion, our priority is being able to publish TSPL using DocC. So maybe a better phrasing is this: Should we consider ease of writing the grammar as a goal? Do the changes/compromises I’m suggesting still meet the goals?

I don’t want to side track too far into rewriting the entire grammar with a different notation — that would delay the adoption of DocC, and isn’t really something we’d consider until after DocC-ification. But we can continue discuss it a bit here, to decide whether it’s an idea we want to come back to in the future. Many of the original Swift 1 era reasons to use this simpler grammar are still true today. BNF family notations for grammars allow more complex kinds of production rules, which means they take longer for a new reader to learn. I think the trade-off is worth it: the grammar becomes slightly more verbose for the most experienced readers, in service of making it possible for a larger audience of less-experienced folks to read the grammar. This goal is also why the grammar uses full English names like “superclass-expression” rather than abbreviated names like “expr-super”. For comparison, you can look at the “LangRef” grammar used during development of Swift 1.

The point @ibex10 raises about repetition is a valid one: After you learn the EBNF notation, it’s easy to spot these. The approach TSPL takes is one of convention — we use plural names for repetition without separators and names like foo-list when there are commas or similar. For reference, here’s that section in the TSPL style guide.

I don’t think writing the grammar in plain text is really a goal — this book has a full range of typographic styles available, and it should use them for readability. Whatever markdown we need to write to typeset the grammar will necessarily be well defined, meaning we can extract that part of the book and transform it into a machine-readable grammar if needed. There has been some separate discussion about using the same grammar in the new Swift parser and in TSPL, which dovetails neatly into that as wall.

@taylorswift I probably missed that original post because it’s in the forum area for development of the Swift compiler. This is absolutely an issue we should address. If you have a GitHub account, can you create an issue? Otherwise I’ll open one to track these errors.

PS I also haven’t programed with punch cards, but I enjoyed watching a training film for the IBM 029 keypunch, and I use ed(1) regularly.

I've created a pull request to review this change:

DocC doesn't support subscripts, so instead of using subscript "opt" for optiona…lity, use a postfix question mark. Alternatives considered included text like "OPT" or "(opt)" and Unicode subscript characters. The former are hard to read and interrupt the flow of the grammar. The latter render poorly because they're intended for phonetic annotation, so the different letters don't share a baseline in many fonts. It's a known issue that DocC doesn't support hard breaks, so insert a paragraph break between each grammar production for now. I added a "double" paragraph break between groups, where there used to be a blank line, to preserve that information for when DocC adds hard break support in the future. Fixes https://github.com/apple/swift-book/issues/3 Fixes rdar://101001280