Cycle in dependency when adding `module.modulemap`

I have followed steps mentioned in swift-static-library-in-objective-c for adding this support.

Did you ever find a solusion to this?

@alexpell00 Not for this specific error, still trying to figure out why adding mobulemap copy causes this error message and the root cause. But if you're getting cycle in dependencies error message, https://help.apple.com/xcode/mac/current/#/dev621201fb0 has a good write-up on how to debug and steps to take. The error message is different for each case so just look for that.

There's no silver bullet solution for this issue. Based on my experience, following steps have helped to fix some of these

@alexpell00 Also, forgot to mention, try to move the modulemap copy phase above below Dependencies and above Compile Sources. 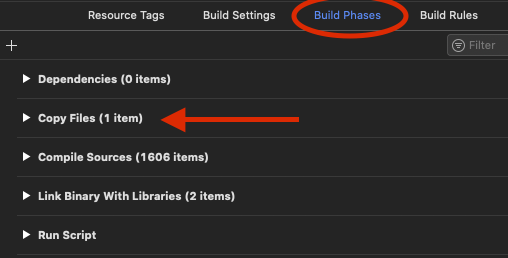 That helped with one case of cycles in dependencies.

@maniramezan Thanks for the replies! I finally found the issue last night, one of my frameworks was being built with an objc bridging header. Removing the bridging header and using a proper public framework header did the trick.

I didn't think frameworks were allowed to have bridging headers, so I'm not sure how I was able to build it. I still need to explore that a bit more.

Still having this issue with different permutations of the error message, none of which makes much sense and are helpful to get to the root cause. The current version is:

Was wondering if there's a way to grab more information from compiler / build system regarding what is causing the cycle in dependencies? For example, in this case, there's no link between the dynamic framework and static framework. The dynamic framework is a simple class with one .m and one .swift file with some private headers. And this issue has started happening after .modulemap has been added. So my assumption is something between copying .modulemap for the static library dosn't sit well with creation of dynamic framework which itself also has .modulemap file in its .framework structure.

For anybody reading this thread later, for this issue, moving away from using static library and replacing it with static framework which removes the requirement for having a modulemap file and manually copying it into destination folder solves the issue in our case.