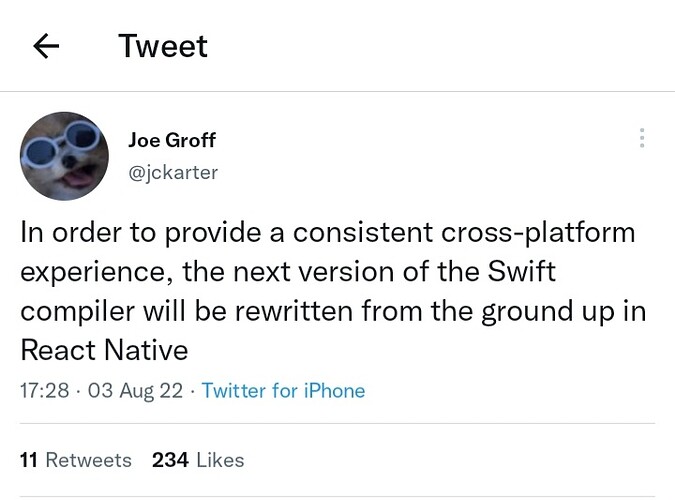 Just to make the implicit explicit: Joe is being facetious in that tweet, inviting us to imagine the absurd implications of an absurd idea.

Why React Native and not something more native like C or C++?

The react native part was a joke.

The write once run everywhere mantra will always hunt us. 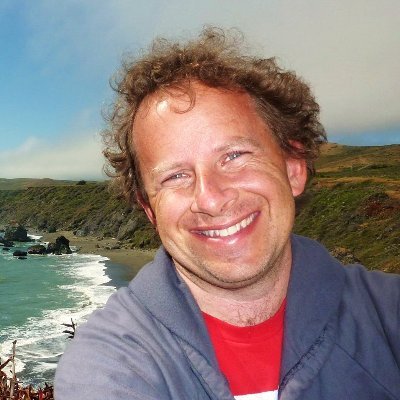 @jeremyphoward
My keynote at JuliaCon, "Standing Out - What makes a programming language successful", is now available! In it, I describe why I want Julia to succeed, and what is going to be needed to make this happen. youtu.be/s6pjxCuNGjc?t=…
1 Like
beccadax (Becca Royal-Gordon) August 4, 2022, 7:04pm #5

Joe is an inveterate “shitposter” on his personal Twitter account. He was making a joke about the fact that some popular mobile apps have recently moved to React Native by suggesting that the Swift compiler was going to undergo a similar shift—a silly idea since React Native is used primarily to create cross-platform user interfaces, but a compiler does not have a graphical user interface.

Thanks for the elaboration. @beccadax

The write once run everywhere mantra will always hunt us.

"write once, run everywhere" was the famous slogan of Java which was not true in practice.

The compiler is compiled for macOS, iOS (in Playgrounds), Linux, Windows, BSD, Android, and Haiku, among others I've missed. It is definitely a cross-platform compiler.

It can also be used to cross-compile from one platform to another. It just happens to be written in C++.

Swift compiler is by design a cross compiler, as it is one of its most use feature: compiling for iPhone / AppleWatch / AppleTV from macOS.

And by the way, swiftc has a -target parameter.

I think some folks work on a tool (I think it’s name is Swifty) that should help with compiling for different platforms. While you can currently compile to target different platforms, you need to be on those platforms. This is less noticeable in Apple platforms since the SDK of all OS’s are accessible to the compiler. You can’t, however, at least to my knowledge, target Linux from a macOS compilation. The problem is that macOS doesn’t have the necessary SDK’s used by components as basic as the standard library. So while you might be able to generate the machine code for x86 or arm you can’t really make system calls. I’m not sure exactly what folks are working on, but people are aware of this problem.

Why React Native and not something more native like C or C++?

What could be more native than React Native? Maybe if they come out with C++ Native in the future we could consider using that instead of React Native, but until someone comes up with another toolchain with the word "native" in it I think our best bet is to use React Native going forward

As far as I know, I didn't see available Swift toolchain on FreeBSD or other *nix systems outside of Linux and macOS. At this point, Swift's cross-platform isn't comparable to Rust.

FreeBSD is one of the platforms that received an early port and @3405691582 has been working diligently on the OpenBSD port. There was some work towards a Haiku port as well.

As far as I know, I didn't see available Swift toolchain on FreeBSD

FreeBSD is one of the platforms that received an early port

Just some thoughts: I think there is a difference between „supported by swift.org“ (i.e. listed on the download page) and „runnable in principle on system soandso“ (e.g. RedHat I think). The second might be interesting and nice, but being able to say „it is supported“ is an important thing. Maybe this is a misconception (is it really necessary to be „supported by swift.org“, or what would this really mean?), but then how to address this misconception, or how giving people a way to judge if it is „quite safe“ to use Swift on a certain system? Compare this to Rust: There the answer is also not that easy, but at least they try to give a helpful answer…

It seems like Swift really only has two tiers that roughly correspond to Rust's Tier 1 and 2, and Rust's Tier 3. Really, they are: Swift ships officially for the platform and there are guarantees it will build and ship for those platforms, and the community supports this platform (with various guarantees of support, from community CI to only periodically checking to see if it builds on the platform) or Swift exists for the platform and is shipped by platform vendors/packages/ports systems available.

That first tier I would say are the platforms listed on the Downloads page; the second tier is a little more nebulous. We could do a better job of documenting that second tier, I suppose, but it depends if you're approaching Swift from someone who is comfortable downloading the source and building it versus if you're just looking for a software package to install...

This works well for Droid. 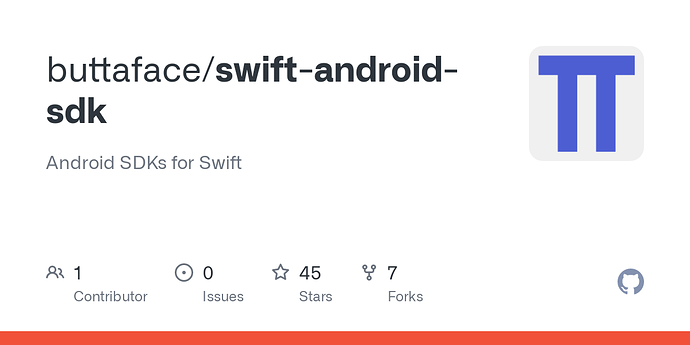 Android SDKs for Swift. Contribute to buttaface/swift-android-sdk development by creating an account on GitHub.