As I promised weeks ago, I'd like to set up a "call for interest" in discussing community investment using Swift for embedded / bare-metal / low resources programming. There was vocalized interest in creating a workgroup (or workgroups) that focused on these areas:

I'll put one flag-post right here @tkremenek . Me and the Swift for Arduino guys are interested in helping to form a working group on things to do with bare metal Swift coding / realtime / extremely low resource environments. Is there some way to make this happen? In particular something that can work synergistically with the other working groups and important governance structures at the heart of the language.

I want to host a video conference call where we can bring folks interested in these areas together to explore exciting directions! The call covers a wide range of potential investments, and in the end, if there is enough interest and activity, I can see the formation of multiple Swift workgroups.

To provide some more background context for the post, I'd like to shout out the excellent post by @andyliu, which covers a lot of relevant concepts and terminology:

Hi everyone! Since @tkremenek said there would be some new workgroups in the Swift community, I want to share my experience in embedded development using Swift. I know this must be very unfamiliar to most of you guys. But the embedded development has been trending in recent years, especially in the IoT area. Since the hardware is becoming more powerful, the software is immediately becoming more complex. Besides, most embedded engineers have to use C without alternatives. The consequence is that …

I am looking to schedule the video call sometime during the weeks of May 9 or May 16, where those interested can gather together and explore opportunities for collaboration. There may be interest in participation from individuals spanning a wide range of timezones, so I'd like to survey what times work. It might not be possible to find a time that works for everyone, but we can see what we can do!

I've created a forum link to create a partially constructed direct message to me for those interested in attending the call. Please indicate the days and times that work for you (including being clear on the timezone). Once I figure out the timing, I'll follow up with details.

Hi, I tried to indicate an interest by creating a message on the forum link , but it is not possible for me to send you this direct message.

I've been receiving messages from others. At any rate, the forum link would have populated a message that looked like this:

During the dates of May 9-13 or 16-20, I am interested in participating in a video call for a "call for interest" for discussing community investment using Swift for embedded / bare-metal / low resources programming.

The following days and times (please include timezone) work for me:

If you can provide me a list of times (with timezones) as a response here, that would work for me!

Happy to jump on a call related to this ! Open both weeks with a few days warning .

It's weird, but I hope you received my message, as I also received an error on the reply I sent you. Probably because I use a different email in the forum than on my business email.

During the dates of May 9-13 or 16-20, I am interested in participating in a video call for a "call for interest" for discussing community investment using Swift for embedded / bare-metal / low resources programming.

The following days and times (please include timezone) work for me:

Probably it is disallowed because I recently signed up for the swift forums. These are the error messages I get:

Ah, as this message was also bounced, but this time with a proper error message, it is probably because I signed up using my github email, which is not my normal email.

Nope: third time is a charmer?

Thank to everyone who responded! I have scheduled a call for May 19 at 9AM PST. If there is anyone else who is interested in attending, please reach out to me!

I'm having the same issue as others with sending a DM to you. If it's possible to still join the call tomorrow I would love to join. I've been working with @carlos42421, @axello, and others on Swift for microcontrollers.

ve scheduled a call for May 19 at 9AM PST. If there is anyone else who is interested in attending, please reach out to me!

Same as Axel and Paul, I will try to join, can't DM you.

I have sent DMs to everyone who responded on this thread saying they could not DM me.

It was a good call. I have some rough notes to stitch together that I'll post (hopefully soon). I'll also received some suggestions from various folks on what they'd like see come next. I hope to circle back with all that signal soon and suggest possible next steps. In the meantime, I encourage anyone to comment on this thread if they have thoughts and suggestions.

Thanks @tkremenek for arranging this discussion. I'll show some opinions from my side.

Many software engineers may be quite unfamiliar with the embedded field and feel confused. Low-performance and limited resources seem to be their first instinct, and there is not a really clear definition to clarify what embedded development really does. In fact, it can include the work related to a few cents worth of MCUs, or powerful computers with a general architecture. However, the different scenarios need different solutions on the Swift side. To facilitate our later discussion, I would like to show my understanding of embedded development as a hardware engineer: 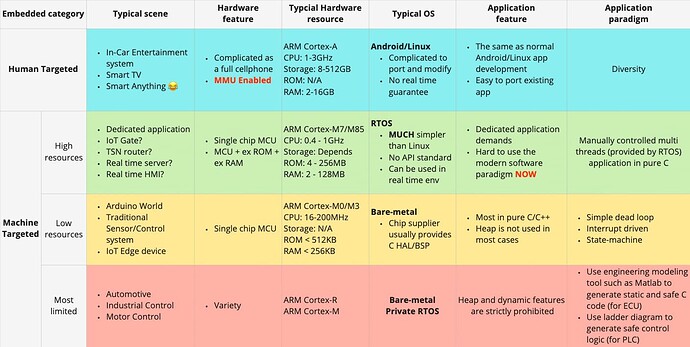 The High recourses MCU systems have been developed rapidly in recent years and don’t have a widely adopted development model. But the other three categories already have their commonly used development model and procedure. Although these four categories require different demands, the most common one should be a turnkey solution for cross-compile tooling which has been discussed sometimes in this forum. Some guys also created tools for it and as I know, SSWG is also working on this currently. Something like rustup would really be helpful for the compilation for different hardware/OSes (ARM Linux/MCU/WASM), and what's more, remove the barrier for those who aren’t iOS/macOS developers. I hope the Swift team could discuss more in the forum about the related work, so developers with different platform backgrounds could share their opinions.

The turnkey cross-compile support is so important, but it relates more to higher-level tools (such as SwiftPM) and platform-related libraries/SDKs, not the compiler itself, so I wonder is it necessary to create a dedicated workgroup for better tooling support?

So far, the Swift community has made several attempts, including server, AI, UI DSL, etc. and is still exploring the boundaries. Now Machine targeted field (such as IoT) is becoming a new era for the next decades. If we do want the Swift language to become a real system-level language, then this field cannot be neglected. And what I am trying to do is based on a natural idea: If Swift is targeting different platforms, then why not RTOS?

Swift is really suitable for building complicated app models. As for the hardware, you can see, in the image below, TI just published an 800MHz MCU with 4 cores, NXP introduced a 1GHz MCU. I cannot imagine how I develop applications for such powerful processors using only the C language. 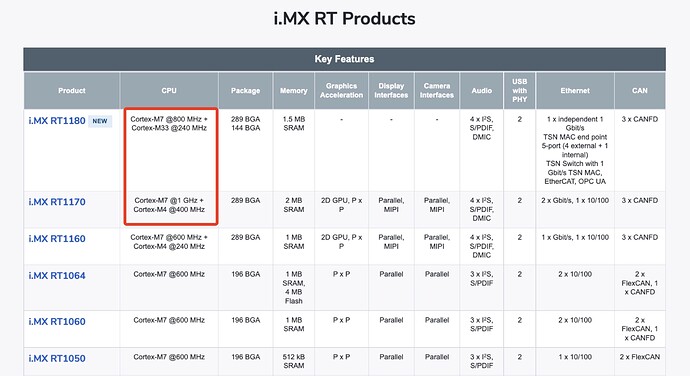 What I have done to run Swift code with Zephyr

What I’ve got: Standard Swift app can absolutely run on non-MMU CPU

I’m full of expectations towards its future development.

What support I need to make this better

Update: With the language workgroup / core team changes announcement now out, my hope is to circle back on this topic shortly. With WWDC and the stuff that was just announced, this all got severely delayed on my end.