I'm happy to announce that a first release of the Benchmark SwiftPM command plugin is available which supports both macOS and Linux (tested on Ubuntu) with Swift 5.6 or later.

There's a sample project showing various Benchmark API usage and ready-to-use GitHub CI workflows samples (it is highly recommended to use dedicated GitHub runners for any real benchmarking in the CI pipeline).

It's intended to be suitable for both ad-hoc smaller benchmarks primarily caring about runtime as well for more extensive benchmarks caring about additional benchmark metrics such as memory allocations, syscalls, thread usage as well as support for custom metrics.

A sample benchmark can simply be:

and give output similar to: 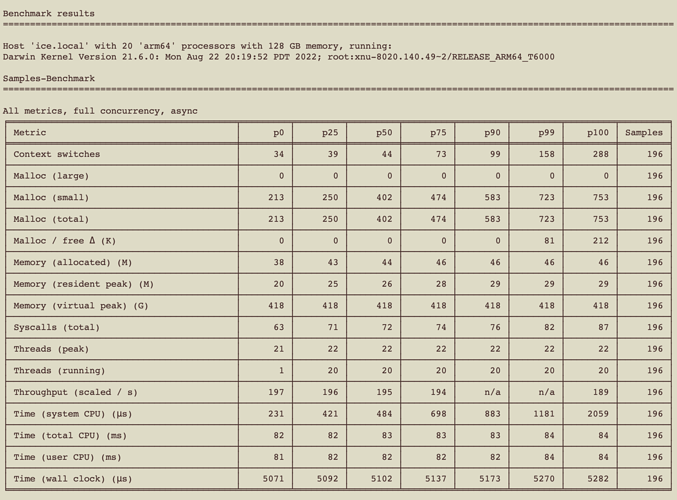 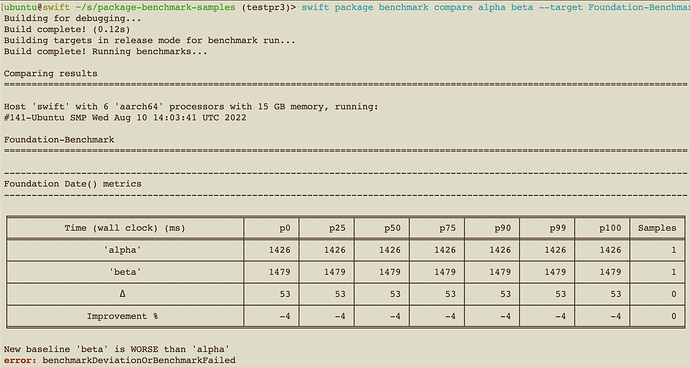 wow, great work Joakim! i will definitely be integrating this into my libraries when i get a chance!

This is very cool. I love that it can track mallocs too!

Thanks! Yeah, malloc tracking is very important for us - it does require you to install jemalloc though to facilitate that, but I thought it was a reasonable tradeoff. There are tons of memory allocator stats available, it’d be possible to surface additional ones if any makes sense in the future (basically anything in the “mallctl namespace” from JEMALLOC )

Very nice work! Super happy that you followed through on the promise for the plugin

This looks like a great foundation we can keep building on...

Only had a short look at JMH, looks feasible and could be a future addition - except for "raw data" - but maybe the visualisation tool can work without that - I don't keep the raw samples around, as memory consumption would be prohibitive for many of our tests, so the implementation do linear bucketing (10K buckets, for whatever units that are in use) and falls back on power-of-two buckets for anything outside that range. (opened Investigate supporting JMH format for output · Issue #4 · ordo-one/package-benchmark · GitHub for that)

Yeah, I spent (way too much) time with different approaches, don't remember all the details, but I ran into a few different problems with regard to Swift Argument Parser integration and the protocol approach that I couldn't get working. May revisit later, but couldn't spend more time there at the moment (as the current declaration is similar to e.g. Google benchmark I'd expect it to be fairly acceptable) - it's not truly a result builder, but just faking it with a discardable result init. The good thing is that no special hooks are needed for shared setup, it can just be done outside the Benchmarks themselves and only be run once.

Currently it's running 3 iterations if you want warmup - I don't particularly mind making it configurable, but I'm actually curious if there are any reasons to run more than a few iterations (basically to fill any caches) when using a 'proper' compiled language?

Thanks! Let me know if you see any incorrect behaviour (the repo is open for filing issues), it took some digging of the jemalloc stats until I've got what I believe is the correct counters to reflect what one expects.

For anyone playing with it, you might want to update to 0.3.3 just shipped that fixes a few niggles (and allows for free naming of benchmark targets as long as they are in Benchmarks). 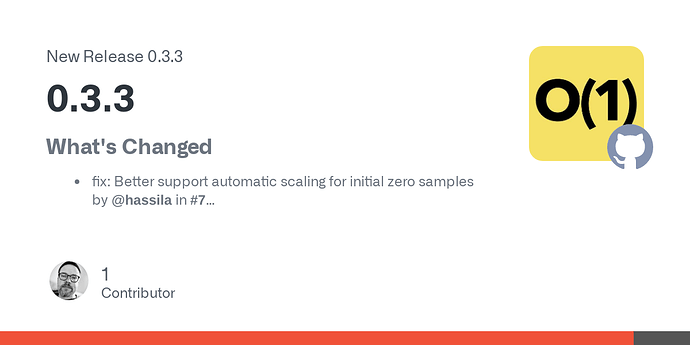 I've been using it a little and have some more feedback, though sadly can't open issues on the tracker directly right now.

I find it very confusing that each benchmark decides independently what unit to report the results. It's a pain in the neck to have to manually remember and multiply between ns, us, ms because the benchmark infra decides to report one test as ns and another as us but I want to compare them. Sure, one is by far larger result than the other, but I really don't want to do additional math on results: they should be plain as day: n > m, and no other math i need to be applying to compare two results.

Can we add some desired, or actually "resultsTimeUnit" for an entire benchmark suite run?

More feedback coming soon, I like the library but have some small things that annoy during normal usage here and there. Overall great start though, very happy about the effort.

Issues should be open for creating, or why can't you open issues?

But specifying time units for the test is possible already, see e.g. this sample

Or am I missing something?

Or re-reading, you'd like a convenience to set it for multiple benchmarks in one go?

Thanks I didn't notice this I think.

Yes, for an entire suite; it's annoying to have to remember to set it on every benchmark I'm adding.

Minor bug as well: if you register two benchmarks with the same name one of the benchmarks is silently swallowed and never runs -- this can happen when you dupe benchmarks and just tweak them a bit -- instead this should result in a crash please 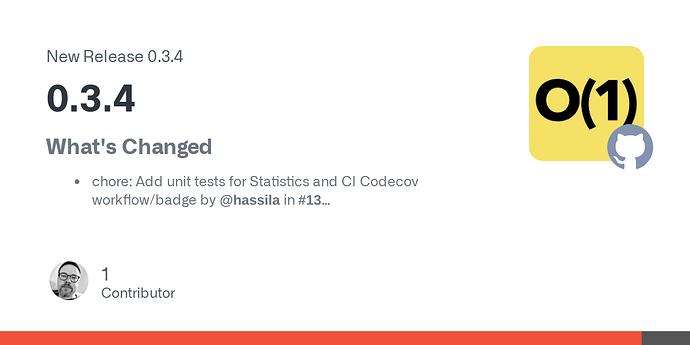 I look forward to polishing up this plugin 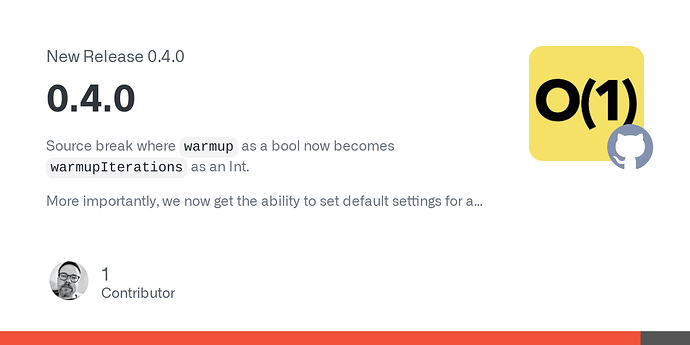 Source break where warmup as a bool now becomes warmupIterations as an Int. More importantly, we now get the ability to set default settings for a whole benchmark suite easily, see below... What's ...

Major cleanup is that it's now possible to set all parameters as defaults for a whole benchmark suite, also cleaned up delta output so it's easier to understand what thresholds were broken for a PR.

And 0.4.1/0.4.2 was released - if you are measuring very short time periods and don’t measure malloc or OS metrics, you’d want to update as the overhead for measuring have been significantly reduced (wouldn’t impact the quality of measurements, but would impact real world time spent waiting for the benchmark run for such setups).

Also fixed a bug for absolute thresholds where the units would be the same as measured (now instead concrete helpers for defining them, e.g. .mega(3) or .milliseconds(5).

Release notes for both are at: 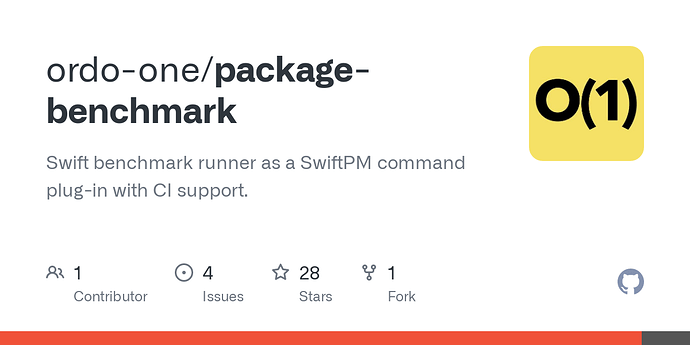 there were no instructions for installing libjemalloc-dev on Amazon Linux, so i installed it with the following:

when i try to compile the plugin i get:

Hmm, not at computer right now, but checked our CI and we seem to have a 5.x.x version of jemalloc, so would guess that symbol is missing in 3.x. Any way to get a newer version installed?

Haven’t tried with anything except Ubuntu unfortunately yet (and macOS of course).

Might also be an issue with not finding the header file for jemalloc, but then swiftpm should have given you a warning IIRC.

Quick google gave one hint that source install might be needed (with steps):

Compiling from source for Amazon Linux 2

Different is worse I used to know struggle with  make & automake but I knew enough to get things done. Now I have fun with make, cmake, ma...

building from source worked for me, here is what i put in my dockerfile if it helps anyone:

after all the usual swift toolchain dependencies.

make install installs the libraries in /usr/local/lib, which the plugin can’t find, so you also have to do: