Why are open and close parens needed "()" on line 7, please? (Newbie Question) (Closures)

Apologies for the newbie question.

I really do try and figure things out for myself before coming here.

Why are open and close parens "()" needed after the close curly brace "}" on line 7, please?

As a bit of back story, I found this code in a bunch of instructor provided code that I was attempting to read and understand.

I do know that every character is important in code, and I came across these open and close parens and was wondering what syntactic service they were providing here.

(File: "Processing Data.playground" as part of the "teacher" zip file as part of "Develop in Swift Explorations.")

I tired to isolate the code as much as I could to pare down the issue, and I renamed "ShowsBuilder" to "ShowsBuilder2" to get rid of a redeclaration error. 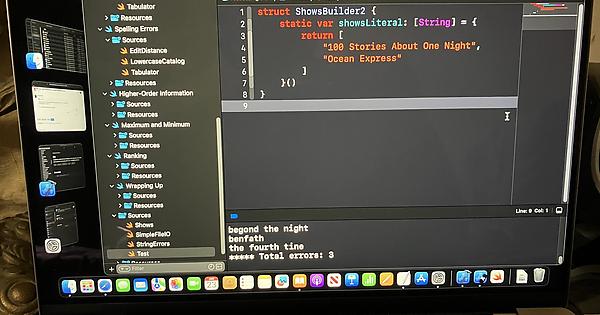 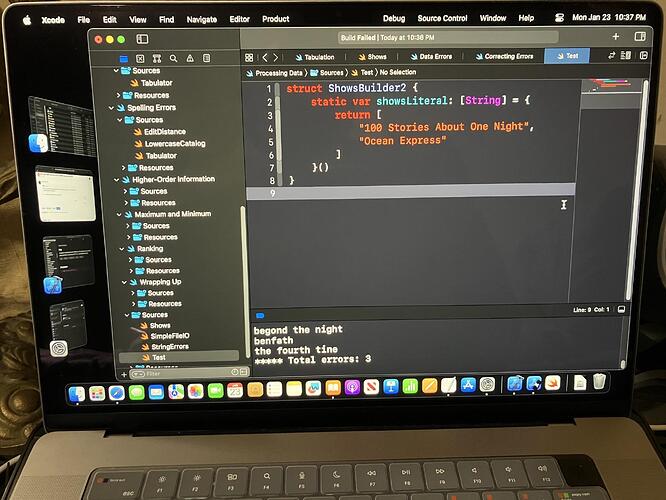 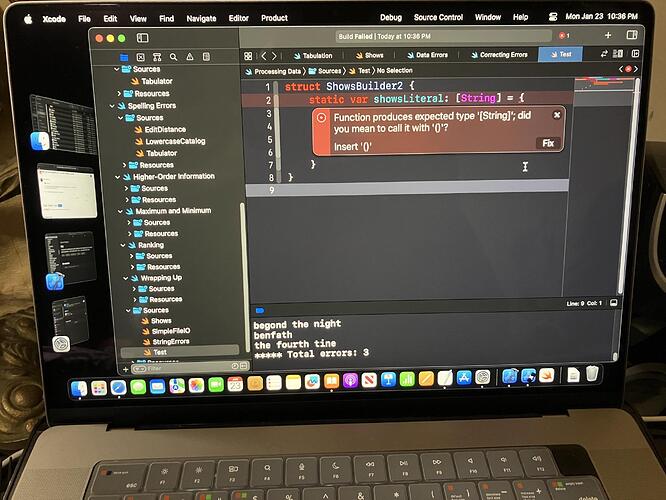 I looked up closures, but wasn't able to pattern match against them with this issue.

Thank you for your time.

The block of code you are creating to initialize this property is indeed a closure. If you don't call the closure you would be trying to assign something that is of type () -> [String] (your closure) to a property that's supposed to be a [String]. The compiler suggests you call the closure instead which means that you assign the return value of the closure to your property.

I haven't come across a formal name for initializing properties through closures yet, but that's what you're doing here.

What we commonly call "functions" and "closures" are both just functions to the compiler. The only important difference is that a function declared via the func … { … } syntax is a named function, and a closure is an unnamed function.

Let's say you have a named function in your struct:

If you think of the syntax static func showInitialValue() -> [String] as the "name" of the function and then set that aside for a moment, you'll see that what's left is the part in the braces, which is the same as the closure that you originally wrote.

This is not an accident. Using a named function is really the same as using a closure, apart from a bit of ceremony in writing the name of the function.

That's also why you needed () after the closure. If you tried to write this:

you'd get the same compiler error, but in this case your intuition about using functions would make it clear why you need the parens — you want to apply the function here, to determine its returned value, not just mention the function.

Incidentally, I think it's a kind of bug in the compiler (in the wording of the error message) to use "function" indiscriminately for named and unnamed functions, since we normally use the informal "function"/"closure" terms instead. Might actually be worth a bug report.

I really do try and figure things out for myself before coming here.

Understood, and nobody here minds that you ask. Your questions are on-topic for this forum, so it's right that you come here for information like this.

It will save you a lot of time, and make it easier to get help, if you use screenshots instead of taking a photo of a screen. Command-shift-4, and then dragging out a rectangle, is one of my favorites.

On your Mac, take pictures or recordings of the screen using Screenshot or keyboard shortcuts.

Your page and your site looks awesome and super helpful.

The sample code on your page pattern-matched for my issue better than anything I found on:

If you made Swift Programming Tutorial videos, I would surely watch them.

P.S. How would you compare and contrast a "Swift closure" with a "Scheme lambda" which I learned about long ago?

Thank you, @QuinceyMorris, for your clear explanation!

You should write text books!

So, I did a bit of thinking and "developed" some code:

And when I look at the value of

It looks exactly the same as

From above. Here is ShowsBuilder2 again, for reference:

Now, please note that this code was all behind-the-scenes code written to make the exercise work. None of this was part of the "exercise" of this lesson. It probably wasn't meant to be read at all.

My question: Isn't the closure in this case totally superfluous?

Why did they make a closure with a single line of code - that just returns an array of string literals?

It just a block of code that returns an array of strings.

Why not just feed the array of strings directly into the assignment operator? ("=") (Like I did in ShowsBuilder3.)

No need for a closure at all in this case, right?

Thank you for your time.

No need for a closure at all in this case, right?

No, I don't think there's any difference in this case.