I have a beginner question.

Namely, I have a problem with the preview provider and I do not know how to deal with them. It is helpful, no question, but I don't know how to handle it elegantly. Example:

I use an environment object in my views. When I compile the app everything works. The data is displayed compliantly.

However, the preview is no longer displayed. There comes the message

I have googled a lot, but not really found anything. In all the examples I have, the PreviewProvider is not used anywhere :) But I guess I'm doing something wrong in general

Xcode/Framework specific questions are generally better asked on the Apple Developer Forums, this is a place for questions about the Swift programming language itself.

I think this should work:

I don't use SwiftUI that much currently so I could be wrong.

TeamPuzel has one right answer. You will either need to re-architect to avoid that dependency on the environment object (described in the next paragraph) or mock the object and include it in the environment for the preview provider as shown by TeamPuzel. It is generally a good idea to design environment objects to be easy to mock. Such as swapping in a in-memory database if it represents an on-disk database.

Although not your question, you are bound to run in to this too- Stuff you are doing to initialize your app also tends to break previews. You can use this package to check if you are running the app in SwiftUI preview mode in order to simplify your app startup. 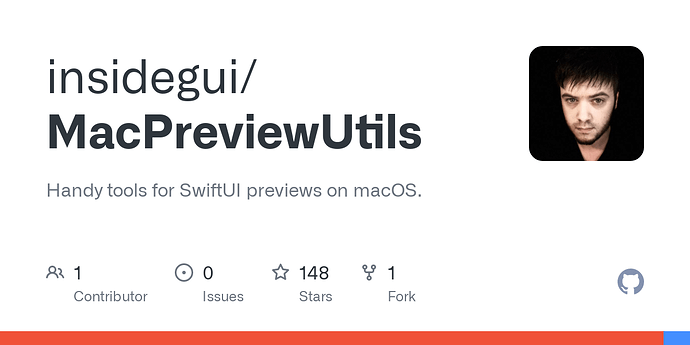 Handy tools for SwiftUI previews on macOS. Contribute to insidegui/MacPreviewUtils development by creating an account on GitHub.

Another option is to use a Framework for your previews since Xcode doesn’t need to run your app to show those previews. It just uses the dynamic linker to start the framework directly. Frameworks embedded in apps feel pretty old fashioned to me, so I usually don’t take this route.

Thank you for the detailed answer.

I am currently looking at how I can best implement something.

Basically the database entries should be stored in an environment object after logging in.

But even as I write these lines, I guess it is better to save changes made by the user punctually immediately in the database...

Even if you are using a different database, you might want to look at Core Data examples for inspiration. A handle to the database might be stored in an environment object, but any model objects should generally be passed a different way. This might be a bit complex to generalize since databases often have threading requirements that restrict how things can be passed around.