<pedantry>Well, the writing system isn't necessarily base-10. There are base-60 values in Unicode. But the base only matters if there's more than one digit anyway, and even then that's only true in a numeric system that uses position. "ⅭⅯ" (U+216D U+216F) would have a numeric value of 900, and 「三十万二百」 is 300200.</pedantry>

<pedantry> Character.decimalDigitValue returns nil for those. That's my point. </pedantry>

Oh. Why? People shouldn't build their own base-10 parsers on top of decimalDigitValue, that would exclude other ways of writing numbers.

We could do a more general query on graphemes:

Alternative: “numericValue” with some kind of grapheme evaluation logic

If a Character unambiguously represents a decimal digit in a well-defined writing system, it makes sense to be able to access that value.

We also totally should have a more general number parsing solution. I'm interested in this, but outside the scope of this pitch.

I don't understand why "decimal digit" is an interesting case but「万」is not. Did I miss a point in the thread above? (If so, sorry!)

I'm asking why there's a specific API for isDecimalDigit or decimalDigitValue at all. "Hex_Digit" is special, you justified that above, but "decimal digit" doesn't seem to be, even though it's one of the properties Unicode provides.

How is isDecimalDigit not special but isHexadecimalDigit is? How else can you get the value of a character that represents a decimal digit?

A numericValue would behave correctly on all values that respond to isNumber. The only reason to ask isDecimalDigit is to build a string-to-numeric converter that handles multiple scripts but not any non-decimal number formats, which is not something you'd want in a production program. (You'd either want to just handle ASCII, or include handling of other number formats.) Hex is special because that takes Characters that are not numbers and gets a value for them, and it's limited specifically to the Roman script representations of hexadecimal (at least today).

But eh, maybe I should withdraw this objection. I've been against "simple-but-not-100%-correct" APIs and the tide seems to be moving away from that view in general (cf. String-as-Collection, which I was also against).

No, not as formulated in this pitch. We would need a grapheme evaluator for that.

We could do an alternative where we have a single-scalar restricted query and an associated numericValue. Would you want that to also cover vulgar fractions?

Here is a Venn diagram of numbers as we're discussing them: 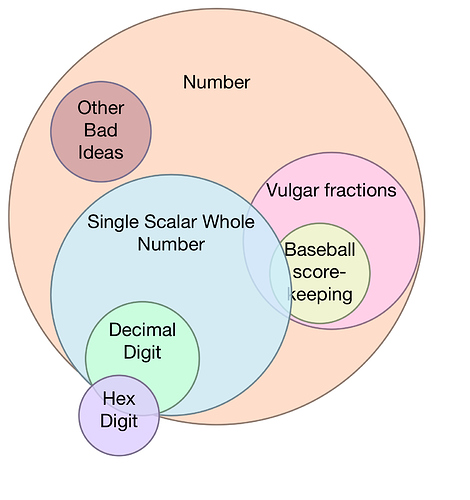 I'm all for broadening the decimal digit API to include single scalar whole numbers, but am shying away from representing vulgar fractions, etc. Semantics would be single-scalar number with a whole number numeric value. What should this be called?

Why not a failable initialiser? One that isn't necessarily limited to ASCII.

So it would be:

Just posted an updated pitch, where I tried to address this. I think it's a good idea, just have to weigh against other practical concerns such as type checking complexity, source compatibility, and whether we want the non-ASCII visible directly on e.g. Int.

@rudkx do you think it's worth including the following (rename source-break) in this pitch? What are some of the reasons it improves type checking consistency? I think it's an API improvement by itself, but would like to form more justification:

If we have a good argument, then @Karl's suggestions become more interesting as well!

I, for one, think that this change is the correct move.

I was casually looking through some of the proposals that have been implemented in Swift 5 and saw that SE-221 has gone in which adds the proposed additions to Character which was at the core of this pitch.

I saw in the accepted proposal that the additional properties to String were omitted due to:

Since the pitch has been accepted and implemented the focus could now be moved onto getting the String properties added. I attempted to find the reference to the "generalized lazy split collection" discussion but couldn't seem to find it.

So my question is whats the current status of this and is it something that simply needs bandwidth to sort out or are their deeper implications to this that I'm just not aware of?

The plan is to revisit Range based Collection mutations, which includes subsequence find/replace and more generalized splitting. Doing this generically (Collection/OrderedCollection/BidirectionCollection/whatever) would mean that they apply to String and all it's views, so you can e.g. operate against the stream of Unicode.Scalar values that comprise a String.