Hi all. Following a previous post from 2016 and with Swift 5 around the corner, I would like to continue this tradition of sharing our "field testing" developing apps with Swift.

It's worth noting that 2018 has been surprisingly good on that front thanks to:

Thank you for that, it is appreciated daily!

There remain things that could be improved though. This list isn't meant to be exhaustive, and part of it may even have been solved already with Swift 5 (please do tell!). It is what comes first to my mind when I ask myself the question "What could be improved in Swift?". Here's the list.

Thank you for reading.

Your observations are all astute and your writing style is refreshingly concise. It is great to have someone like you bringing valuable feedback.

Many of these are being discussed in other threads. Posting more specifically about each topic in its own thread would make it more likely that those designing, implementing or just petitioning for the those things will hear what you have to say. If they are already focused on something, they are less likely to take the time to read new threads with unspecific titles. There is certainly value to having a general overview somewhere, so thank you for this. But you are more likely to push things forward by posting in the existing threads. Everyone who has already posted in an existing thread or spent a lot of time reading it will receive a notification of your response, even if nothing new had been posted to that thread in a long time. But brand‐new threads like this one will only be seen by those who aimlessly peruse the “latest” section on the home page or who have actively registered to track the general subject—and even then you are relying on the title to catch their interest, because that is all they will see until after they have decided whether or not to click.

These threads may interest you:

Why not add a scope which allows access to the variables and functions only for the type itself and its extensions, but only within the current module? This would result in limitation of visibility from the outside (the same way private does) except for the fact that extensions could actually change these variables/functions. Also, restricting it to the module at the same time would not allow access to them and doing extensions like xWrapper (mentioned in one of the mails), unless it was in the …

As is well known,, i am not the biggest fan of adding the namespace keyword to the language solely so we can have namespaces in Swift. however! I am a big proponent of submodules and I just had an idea of how we can combine the two concepts and get two features with one keyword. Right now, Swift has modules which have the concept of binary compatibility and distribution, and are equivalent to what other languages call packages. Modules are great for distributing full libraries and applications.…

I told @Jon_Shier I’d write something up on @_exported and visibility in general, so here it is. It’s a bit of a brain dump, but I know if I wait until I have time to edit it it won’t get posted for months. (That’s already true, in fact; I’ve had this model kicking around my head for probably close to a year now.) So, thanks for the prompt, Jon. Today, if your Swift library “Foo” uses a library “Bar”, the headers (or swiftmodule files) of “Bar” must be available to all clients of “Foo”. This i…

As you can probably tell, I've been saving a lot of discussions, waiting for Swift 4.2 to be in a pretty good place before we jump all in on Swift 5. This one's one of the main things I plan to be working on in the next year or so, so I wanted to make sure you all had the big picture. It is another massive Jordan Rose post, so if you want the TLDR, just read the bolded sentences in each section and then jump down to the plan at the end. Thanks! Introduction ABI stability means that an executabl…

I don’t see anything related yet. You could start a specific thread.

It would be nice if you could compare an enum without its associated values i.e a case equality check only rather than case & associated value equality check. For example: enum Foo { case bar(Int, String) } let test: Foo = .bar(1, "Hello") let isEqualWithItsAssocValues = test == .bar(1, "Hello") // true let isEqualWithoutItsAssocValues = test == .bar(_, _) // also true This makes it really easy to compare enums if you only care about the case and not its associated values and you wouldn…

That is probably worth a bug report: bugs.swift.org

I don’t see anything related to either of these yet. You could start specific threads.

There are a lot of threads about different aspects: Search results for 'async' - Swift Forums

Chris Lattner’s concurrency manifesto and his draft proposal for async and await might also interest you if you plan on joining the discussion:

In addition to what you said, I would like Xcode's Generated Interface to:

Thank you Jeremy for your detailed answer and for enumerating all the threads for each point. They look very interesting. I will try to get up to speed and hopefully bring some feedback there.

It totally makes sense to provide specific feedback in appropriate threads, even though this post was also meant as a snapshot of my overall current experience with the language and communicate some sense of priorities where improvement is needed.

I still see frequent problems with the debugger. Several problems I see every day:

Overall deciphering crash logs is a catastrophe. The compiler does a bunch of weird things to optimize the code resulting in crashlogs that are very hard to read and call stacks that seem impossible given the original swift code. What I'm asking for is a document that describes how these things work so that I can understand the crashlogs.

Overall deciphering crash logs is a catastrophe. The compiler does a bunch of weird things to optimize the code resulting in crashlogs that are very hard to read and call stacks that seem impossible given the original swift code. What I'm asking for is a document that describes how these things work so that I can understand the crashlogs.

This is a weird one I've never been able to figure out. We definitely get crashes that have actually impossible call stacks through most of the crash log, so it ends up being trial and error based on other indicators. Definitely been a blocker to identifying issues quicker.

The compiler also inserts helper methods for @objc-labeled code, which is confusing but you can usually ignore them. Also, some code is indicated to be on line 0 of the file. This is also usually methods or closures that have been generated by the compiler.

Today I learned! Thanks for letting me know.

Totally agree. I tried to use the nested types but currently they are very limited to play this role.

Totally agree. For really powerful async and await instructions they would have to rely on something very low level like LLVM's coroutines. I hope it will not be just an overlay over swift-nio.

There is one minor thing that really itches me: same file names within different folders. Good lord it's annoying that all filenames should be different, and I can't have file structure like this

agreed. Better than before, but can still be improved. I sometimes notice an interaction with Obj-C dependencies, and loading those manually in the debugger (sometimes) resolves such issues.

For crash logs, not too sure. We're on HockeyApp, and I'm told the stack trace is less clear than it is on Fabric for instance.

It's been a while, but I seem to remember that groups != folders. You may have a group structure there, with all files living in the same folder. I think files of the same name can exist in separate folders.

Either I'm doing something wrong, or you are mistaken 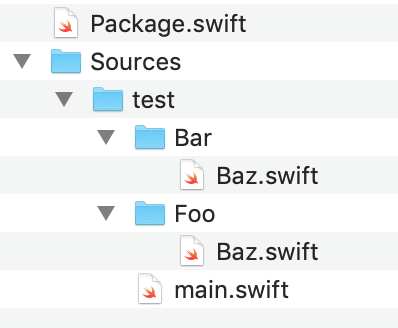 I've just had a shower thought. A few more items to wishlist (all Codable-related):

Originally I though that if I just add a new property to my class/struct and give it default value, Decoder would simply pick it up if it's not present in JSON[.]

I have wished for that too. You would definitely have my vote if you made a pitch out of it.