i have 3 tasks arranged roughly so:

now, my question is: what happens to the sleep tasks if the main task cancels the task task?

so, testing this out on a nightly toolchain, it looks like the answer is no:

we have to do

You're using un-structured tasks here, so there's no cancellation relation between any of these tasks.

Only child tasks, i.e. "structured concurrency", have the property that "inner" ("child") tasks are cancelled when their parents are. Only ways to create child tasks are: TaskGroup and async let.

At least in this toy example, the sleep task could be an async let or a group child task and you'd get cancellation propagation as expected.

// Relatedly, I'll see if/how/when we can update the swift book to provide more details about these things

is not only not structured concurrency, my variable names are lying to me?!

not only not structured concurrency, my variable names are lying to me?!

Check out the structured concurrency talks from wwdc.
Also, there’s a new talk coming up also covering this: https://twitter.com/ktosopl/status/1601151750526095360 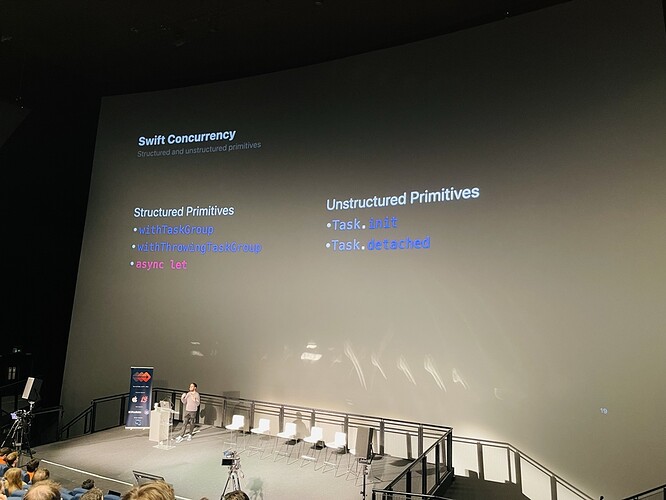 I agree we should have better and more explicit docs in the swift book about this btw. It’s a … process, to get things fixed there but we should be able to do so soon since it’s become open source and easier to submit changes to

i think a lot of the early docs also fixated a lot on the difference between Task.init and Task.detached, which made it seem like “structuredness” had something to do with “detachedness”.

We have to improve the docs around these definitely. Thanks for the reminder

Exactly this - I thought that .detached was what broke it out the structure, not to mention that there was some _inherentContext or something similar in the Task initialization, which I took to mean that it was inheriting structure from the parent.

Check out the structured concurrency talks from wwdc.

I'll also add that I've watched that video more than once. Perhaps it's my fault for not letting that point sink in, but maybe it could have been clearer in the video? I'll have to watch it again with new context to provide better feedback.